Loop Trail Update: Project to Be Rebid This Month 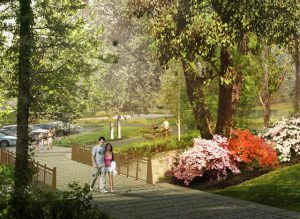 As we reported in the September issue of Arbor eNotes, initial construction bids for the new Arboretum Loop Trail came in $1 million over our budget. Over the last two months, the Foundation worked with its City and UW partners to re-scope the project in order to reduce costs.

Major savings will be made by replacing concrete retaining walls with dry stack stone walls, such as those used in the Cascadia Forest. Other savings will come from using simpler, precast bridge architecture and replacing expensive guardrails with black vinyl fencing. A planned ramp leading from Foster Island Road to the Graham Visitors Center had to be removed from the project and replaced with a simpler, stair-lined pathway.

The City hopes to rebid the project before Thanksgiving and break ground in early spring, 2016.

Article: Read about the design of the Arboretum Loop Trail in the 2015 issue of the Bulletin.