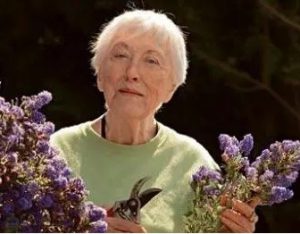 Nancy in her garden in 2006. (Photo by Tom Reese/The Seattle Times)

The Foundation would like to acknowledge the passing of—and warmly remember—a dear friend and Arboretum supporter, Nancy Davidson Short. A legend in regional gardening circles, Nancy died on November 11 after a short illness, aged 103.

Born Anne Randolph Scudder in Vallejo, California, in 1912, to a naval family, Nancy spent her early childhood in seaport cities from Newport, Rhode Island to Bremerton, Washington. She moved to Seattle in her teens and attended Garfield High School and the University of Washington.

She is best known for having been the Northwest editor of Sunset Magazine from the 1950s to the late 1970s. Her passion for gardening was obvious to all who saw the beautiful grounds at her Hunts Point home. She was active in the Washington Park Arboretum, as well as the Lake Washington Garden Club and the Bellevue Botanical Garden. In her later years, she wrote a regular gardening column for the Arboretum Foundation’s GroundWork newsletter.

In 2012, the Foundation hosted a marvelous party for Nancy at the Graham Visitors Center to celebrate her 100th birthday. 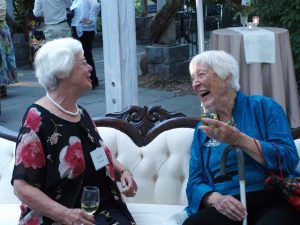 Nancy (right) enjoying her 100th birthday party at the Arboretum in 2012.

“Nancy was a force of nature,” says Arboretum Foundation executive director Paige Miller. “I picked her up at her home only a little more than a year ago and brought her to the Arboretum to meet the preschool kids in the Arboretum’s Fiddleheads Forest School. Nancy loved being in the forest and examining the fungi that the kids brought to show her. She was so full of life, demanding answers of me to all kinds of probing questions. We toured her all around on our golf cart and listened to her stories of when the Arboretum was being built. It was Nancy’s stories about the construction of the Arboretum—written while she was an undergraduate at the UW—that led to her job at Sunset Magazine and ultimately to her heading its Northwest bureau. All of this she related in her breezy and energetic style. And she was then 102!”

“She was like Julia Child. You wanted her to go on forever!” says Foundation Board President Jim Reid.

“She left those of us who knew her richer for the time we spent with her,” says Paige. “She was a gift.”

Nancy was married three times, and her husbands Evan Russell, Philip Davidson, and Maxwell Short preceded her in death. She is survived by her son Randy (Sandy) Davidson, two grandchildren, and two great grandsons.

Memorial gifts: All gifts to the Arboretum Foundation in memory of Nancy will be gratefully received, and her family will be notified.