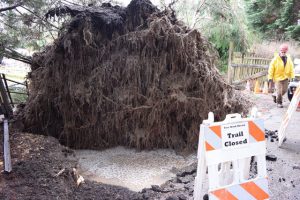 On a wet, windy mid-December day, one of a group of six 100-foot-tall Leyland cypresses on Arboretum Drive, close to the Big Greenhouse, uprooted and fell. Thankfully, no one was injured. University of Washington Botanic Gardens arborist Chris Watson evaluated the remaining trees and determined—given their similar age (65 years old), history, and site conditions—that they were just as vulnerable to failure and needed to be removed.

The proximity of the trees to the education greenhouse, Plant Donations Nursery, the road, and other high-use areas was also a contributing factor in the decision to take down the trees. In addition, Leyland cypress  (×Cupressocyparis leylandii) has a reputation as a troublesome tree.

“They grow extremely fast and limbs break very easily,” explain Chris. “I have spent many hours in each of those trees pruning out cracked limbs on an annual basis.”

This alone would not be reason for removal, adds Chris. But the location of this row of trees is in a very sensitive area of the Arboretum, and the growing conditions are problematic, owing to the fact that the adjacent road was regraded during the construction of the Graham Visitors Center in the 1980s. 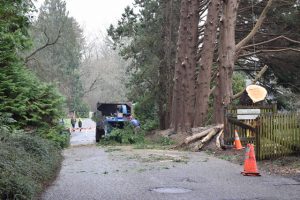 Removal of the five remaining Leylands began in early January.

“A quick visual assessment shows you where the road was cut in the 80s,” says Chris. “The then-youngish Leylands survived, but their roots were certainly impacted, and the resulting ‘shelf’ had limited space for structural roots. Root damage resulting from construction typically doesn’t show up until years after.”

David Zuckerman, horticulture manager at UW Botanic Gardens, used the analogy of a “ball bearing lubricated in oil” to describe the tree that fell over. “The root plate was sitting in water from all the rain with a very shallow water table over compacted ground and no place for the water to drain. Add some wind and motion, and you’ve got 100-foot tree on the ground!”

UWBG curator Ray Larson will decide on an appropriate plant palette to replace the Leylands. Meanwhile, the enhanced sun exposure will be a bonus for the plants growing in the nursery and education gardens next to the greenhouse.