Our Most Successful Opening Night Party Ever!

Celebrating the Arboretum and its Generations of Supporters 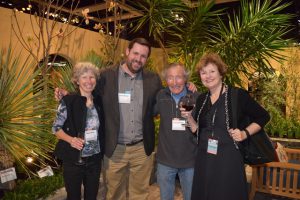 The Northwest Flower & Garden Show returned to the Washington State Convention Center in mid February, and once again the Arboretum Foundation kicked off the show with its annual Opening Night Party (Tuesday, February 16).

“It was our most successful party ever!”, says Foundation executive director Paige Miller. “Thanks so much to everyone who helped make it happen—our amazing guests, event chairs, donors, volunteers, board of directors, and sponsors!”

A highlight of the evening was the “Make a Difference for the Arboretum” event, which raised more than $110,000—twice as much as last year’s raise-the-paddle. “Make a Difference” was preceded by an appeal from guest speaker Scott Wyatt, who spoke passionately about the importance of preserving the Arboretum and other green spaces in this time of dramatically increasing density and development in Seattle.

Along with celebrating the Garden Show’s national park theme, the party paid homage to the generations of families that have preserved and enhanced Seattle’s most treasure park—Washington Park Arboretum—for the past 80 years. Our honorary co-chair at the event was Ann Pigott Wyckoff, whose family has had deep ties to the Arboretum since the late 1930s. Foundation Executive Director Paige Miller thanked Ann, her family, and the many other members of the Arboretum’s larger family for their continued support.

Said Foundation board president Jim Reid, “With Paige’s remarks in tribute of the families who have left and are leaving a legacy in the Arboretum, and with so many representatives of those families in our presence, I could not help but feel the thread that ties us to the beginnings of the Foundation. The event was so positive, so thrilling, and so successful that I feel strongly that we are setting the tone and direction for the next 80 years of the Arboretum’s rich history and to its contributions to Seattle’s quality of life.” 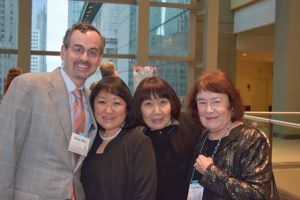 Foundation board members Steve Alley and Jeanne Anderson with friends.

As they do each year, guests enjoyed a fabulous evening of delicious food, fine wines, and alluring auctions—and the opportunity to view the beautiful display gardens at the Garden Show the day before it opens to the public.

Fred Hoyt, associate director of UW Botanic Gardens, our partner organization at the Arboretum, said “I felt like we were all participating in one of THE events of the year for the community. We all take pride in the Arboretum, and as we work together, we take pride in each other.”