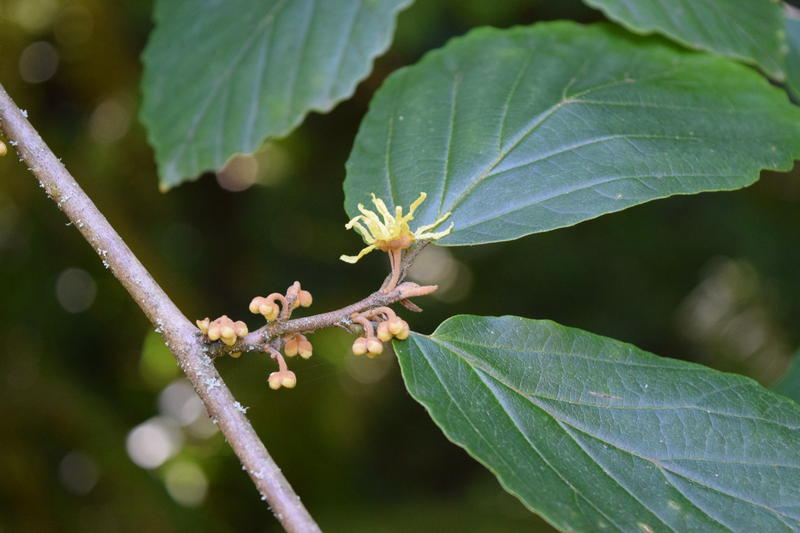 The Virginia witch-hazel (Hamamelis virginiana)—also known as American witch-hazel and common witch-hazel—is a season bender. Just when you’ve reconciled yourself to the idea that the flowers in your garden are all gone and the bloom season is past, this large, vase-shaped deciduous shrub pops into action.

Beginning in late September and October, it produces “spidery,” yellow, four-petaled flowers that fill the air with a spicy fragrance for several weeks. In fact, Arboretum visitors frequently smell the flowers before they see them because, unlike its Asian relatives, this species blooms while still in leaf—at least in the Pacific Northwest (in its home range, flowering may not occur until after leaf drop).

The flowers are pollinated by a wide variety of insects and slowly develop into shapely seed capsules that don’t release their seed until the following fall. So right now, you can see flower buds, flowers, and fruits all on the same plant! When the capsules eventually burst, they do so with explosive gusto, ejecting seeds upwards of 30 feet from the parent plant.

A native of eastern North America, from Nova Scotia to the Carolinas and westward to Nebraska and Illinois, Virginia witch-hazel forms a large shrub or small, low-branched tree, up to 20 high and at least as wide. (Its bark and leaves are the source of the astringent “witch hazel” found in topical medicines used to reduce swelling.) The plant thrives in moist but well-drained, acidic soils in full sun to partial shade; flowering is best in sunny sites.

In the Arboretum: We have two enormous specimens growing side by side in the Woodland Garden, along the path just to the south side of the upper pond. Both date to 1950 and were purchased from Bonnell Nurseries in Renton, Washington (no longer in business), a gift from the West Seattle Garden Club.