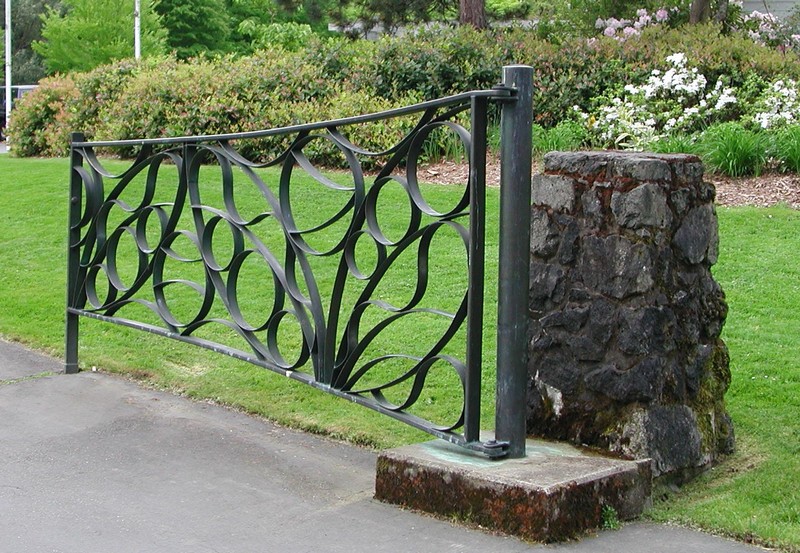 Seattle police have recovered one of two bronze gates that stood at the entrance to the Arboretum for a generation. As Lynda Mapes reported in The Seattle Times, both gates— designed by the internationally renowned sculptor and artist George Tsutakawa—were stolen the night of March 18. One was cut up for scrap, while its partner is partially intact. Sadly, pieces of the recovered gate are missing, and it may be damaged beyond repair. Further evaluation is needed.

This past week, we had a chance to speak with members of the Tsutakawa family, as well as representatives from the Seattle Office of Arts and Culture (ARTS), the department that oversees the 400-plus pieces of public art in the City. We have all agreed to work together to assess the options for next steps—everyone is eager to have a happy ending for this story.

Installed in 1976, the gates—formally known as the Memorial Gates—were created to commemorate all those who have loved and supported the Arboretum. This archival article from the Arboretum Bulletin provides some detailed historical background.

Though the gates were originally commissioned by the Arboretum Foundation and University of Washington, they now fall under City jurisdiction. ARTS has a number of pieces from the Tsutukawa family in its collection and considers the Memorial Gates a major highpoint.

Sketches of the original design have been located, and we are so fortunate that Gerard Tsutakawa, who did the original fabrication of the gates for this father, is deeply involved in the conversation.

As you might imagine, plans will be moving a little slower given the current shelter-in-place guidelines, but our hope is to agree on a path forward in the coming weeks, and then formally approach the Arboretum community for support.

Some generous members of the public have already made inquiries about donating to the restoration of the gates. It’s been comforting to see the outpouring of support from the community during this heartbreaking episode. Clearly, the gates were a beloved treasure.

We are collecting names of folks interested in a possible restoration effort. If you’d like to be on the list, please email us at info@arboretumfoundation.org. We will contact you with further details as things unfold.

Memorial Gates on YouTube: To learn more about the gates and George Tsutakawa, see this short video we produced several years ago.

Jubilant scenes at the Arboretum yesterday during

THEN AND NOW: Sculptor @gerardtsutakawa standing a