Composting Restroom Opens in the Arb 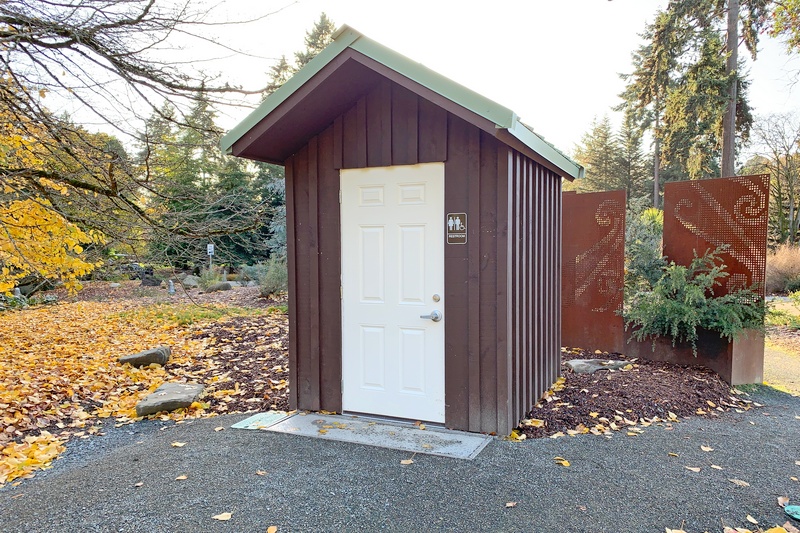 In late November, the Arboretum opened a new composting restroom in the bus-turnaround area of the Pacific Connections Garden. Solar-powered, ADA accessible, and odorfree, it is first restroom of its kind in a Seattle city park. The unit will alleviate the lack of facilities at the south end of the Arboretum, while reducing water waste, promoting sustainable practices, and providing a gender-neutral option for the park.

The restroom was made possible by a grant from the Seattle Department of Neighborhoods’ Neighborhood Matching Fund (NMF), with additional funds from the Arboretum Foundation. The unit is manufactured by Clivus Multrum and didn’t require any new plumbing or electrical lines, which would have been prohibitively expensive and disruptive in this part of the Arboretum.

“We are grateful for the Department of Neighborhoods grant that made this project possible,” says Foundation Executive Director Jane Stonecipher. “The composting restroom is not only a needed amenity for Arboretum visitors but also a sustainable model for similar sites in the region.”

The eco-friendly restroom arrived in April and was installed this fall by a team from UW Botanic Gardens, Seattle Parks and Recreation, and the Arboretum Foundation. The manufacturer was also on site for a couple of days to help with the install.

Says Jane, “It took our entire Arboretum village! Each of the three partners played a role in setting up the site, installing the unit, and getting the area back into tip-top shape after construction. We owe a debt of gratitude to all of the Arboretum gardeners who took on new and unusual tasks to get this toilet operational.”

As part of a two-year trial period, Seattle Parks and Recreation will service the unit, with additional funds provided by the Arboretum Foundation, if needed.

Visitors Center Bathrooms Reopen: In other Arboretum toilet news, the bathrooms at the Graham Visitors Center are now open to the public. Add these to the new composting restroom, the two portables in the Birch Parking Lot, and the facilities at the Washington Park Playfield next to the Japanese Garden, and the options for our visitors are loo-dicrously good!