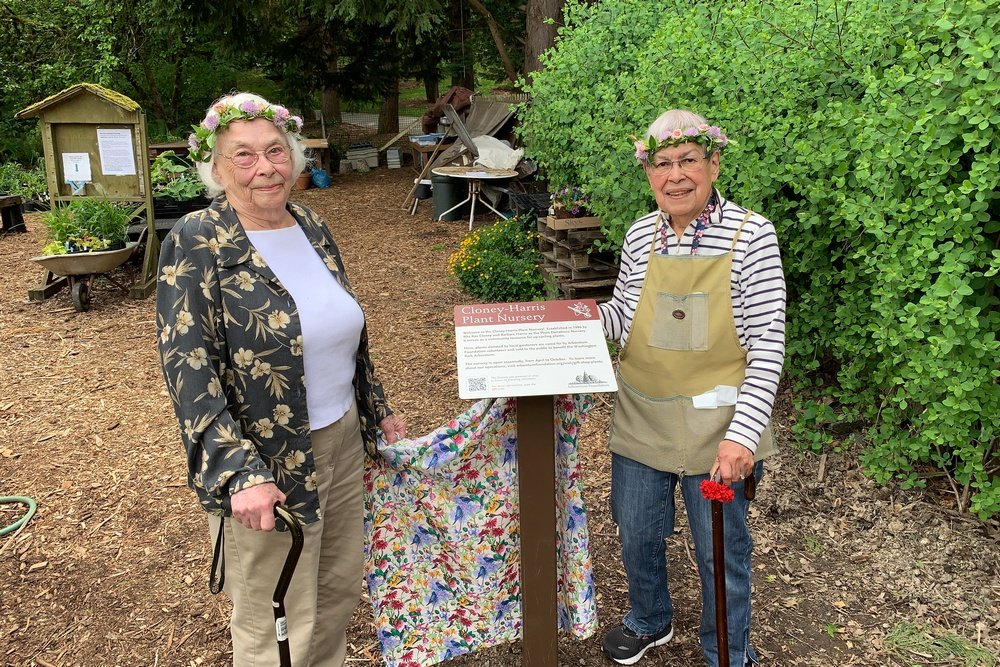 Located just south of the Graham Visitors Center, along Arboretum Drive, the Cloney-Harris Plant Nursery serves as a community resource for upcycling garden plants. Trees, shrubs, and perennials donated by local green thumbs are cared for by our volunteers and sold to the public to support the Arboretum. The nursery has been raising important funds for the Arboretum for more than 25 years.

“In the 1990s, there was a long-discussed idea among the volunteer supporters who helped with our annual Spring Plant Sale,” said Foundation Events Manager, Tess Forte, during the dedication ceremony. “They spoke of a nursery that could operate in the Arboretum and re-sell plants donated during Plant Sale to raise funds for the Foundation. In 1996, this special duo of Rita Rae and Barbara took on the challenge and decided to make that hope a reality. They worked together to build a base of volunteer supporters, learn about running a nursery, teach others about plants, and do their own marketing for acquiring new donations and generating sales.”

“Twenty-six years later and the Cloney-Harris Plant Nursery is going strong and filled with vibrant volunteers who come together for the love of horticulture and their community. We are so happy that other volunteers and park visitors who come by the nursery—and see the sign—will be able to learn about this special group of volunteers who help make the Arboretum shine, and most specifically what can be accomplished when you have two steadfast supporters like Barbara and Rita Rae, who stepped up to the plate to build this Seattle institution.”

Foundation Executive Director Jane Stonecipher praised Rita Rae and Barbara for conceiving the nursery and following through on it.

“A lot of us have ideas,” said Jane. “Some of us even have good ideas, while a smaller subset have the determination and smarts to bring those good ideas to fruition. Rita and Barbara, thanks for being part of that special subset and for laying the foundation to re-home thousands of plants, build knowledge and passion among budding gardeners, and build community around those with shared interest.” 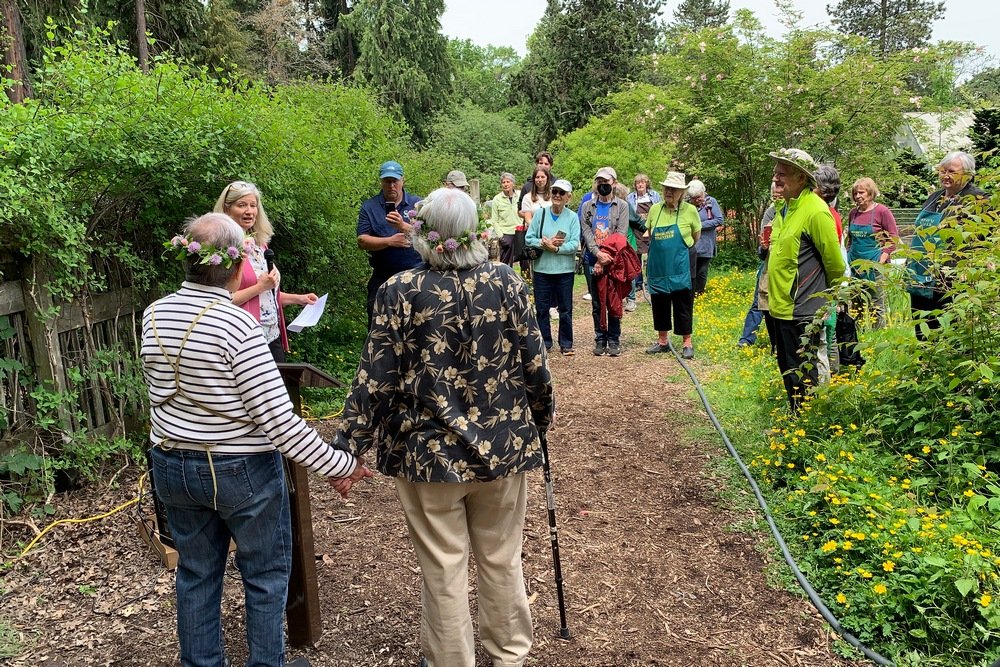 Other speakers at the ceremony included Susan Weinstein and Jeannette Bigler, the current lead volunteers for the nursery program. Susan talked about Rita Rae’s and Barbara’s “talent for attracting others to pitch in with their expertise, experience, and effort—and how they molded a disparate group of volunteers into a team that successfully runs a nursery.”

“In the process,” continued Susan, “they have created a legacy, and within that legacy, they have created a family whose members have worked and learned together, mourned together, celebrated, lunched, and laughed—and sometimes even argued—together. Every member of our team wants to recognize Barbara’s and Rita Rae’s journey by officially naming this nursery what we have always considered it to be: the Cloney-Harris Plant Nursery.”

Another speaker was UW Botanic Gardens Manager of Horticulture David Zuckerman, who facilitated the fabrication of the new sign and has been working at the Arboretum since before the nursery was established. David reminisced about the early days of the nursery and said he missed seeing Rita Rae and Barbara all the time, and gossiping over the wooden fence of the nursery along Arboretum Drive.

Barbara spoke during the ceremony, saying that she got involved with starting the nursery because “she loved plants and wanted to learn more about them.” She said this education component is still an important part of the program.

Following the official ceremony, attendees enjoyed cake and lemonade at the nursey picnic table, and Rita Rae and Barbara told stories about the beginnings of the nursery.

“Dr. John Wott was the director of the Arboretum when we first came up with the idea for the nursery,” said Rita. “Barbara had scouted out possible locations in the Arboretum and noticed that this site, next to the old lathhouse, was vacant and unused. Apart from a lovely old arbor, the space was pretty bare. No plants, trees, or wildlife were harmed in the creation of the nursery!”

“Barbara was on the Arboretum Foundation Finance Committee at the time, and I was working as a volunteer at the Center for Urban Horticulture. We asked John if we could use the space, and he agreed to let us do it. He was always supportive of the idea.”

“We were careful to stress that the program would support the Arboretum,” added Barbara. “It wasn’t hard to convince John, but there were others at the Arboretum who were a bit resistant to the idea, and he help to smooth things over.”

“John said we could go ahead with establishing the nursery as long as we didn’t build anything permanent on the site,” said Rita. “This was great, but we quickly discovered that we needed a shed! So, we got a plastic one from Home Depot that came apart quickly and easily. It’s still the one we use today.” 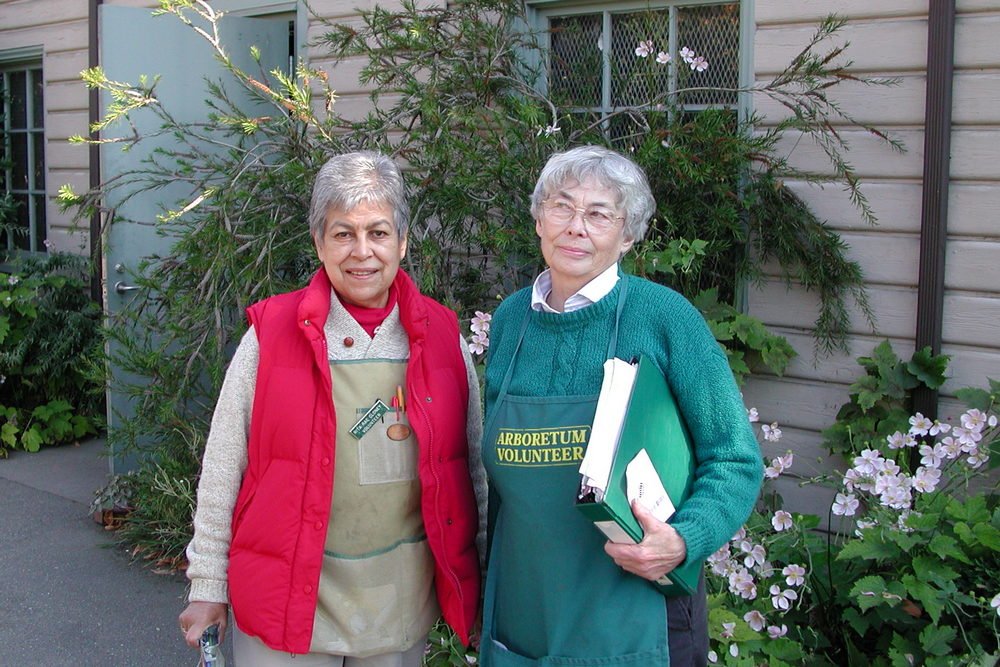 Rita Rae and Barbara photographed in the Arboretum maintenance yard in 1999.

“Finding volunteers for the new nursery wasn’t hugely challenging,” said Rita. “A lot of them came from the Arboretum Foundation plant-study groups that were active at the time—about five or six of them. The Unit Council dissolved around then, and the study groups didn’t have an overarching administration, so many of these volunteers came to the nursery after we put out the call.”

“There were probably about a dozen of us to begin with. We started in March of 1996, began selling plants that summer, and then participated in our first plant sale—the Bulb Sale—at the end of October.”

“Joining the nursery crew was a great way to learn about plants. Education was a key factor, and we tried to teach best practices—both to our volunteers and our customers. We had some very knowledgeable volunteers, such as Betty Wood, who probably knew more than the two of us put together!”

“At first, we were probably our own best customers, but it didn’t take long to gather new ones. We became known for our affordable prices, unusual plants, and knowledgeable volunteers. We also soon had our own small annual sale, Early Bloomers. It grew out of a Unit-run plant sale that happened each March at the Visitors Center. The unit disbanded and was going to discontinue the sale, but it ended up being turned over to us.”

“Eventually, we got quite a number of loyal, repeat customers,” said Barbara. “For example, there was a music teacher who would come every Wednesday when we were on site and comb through the plant offerings. He would plant up his whole garden each year that way!”

“We would get some very interesting donations, too. Some of our customers and donors were owners of specialty nurseries. They would bring us unusual plants from their own home gardens. Various Foundation members who were avid gardeners would also bring us plant material. Or they would inform us about another member or gardener who was moving house and was willing to let us come and salvage plants from their gardens.”

“One of these was Marian Raitz, who was friends with Dan Hinkley and other notable plant people, and had lots of rare plants in her garden. Another garden we salvaged from was Nan Ballard’s.”

“We got lots of tip-offs from Dale Grier,” added Rita Rae, “who was the private gardener for a lot of Arboretum Foundation members. Dale would also keep our inventory of cyclamen well stocked!”

“Oh, and then there was this wonderful lady from Bellingham who used to raise trilliums from seed,” said Barbara. “She’d call ahead and then deliver a truck load that were always in beautiful condition, ready for sale!” 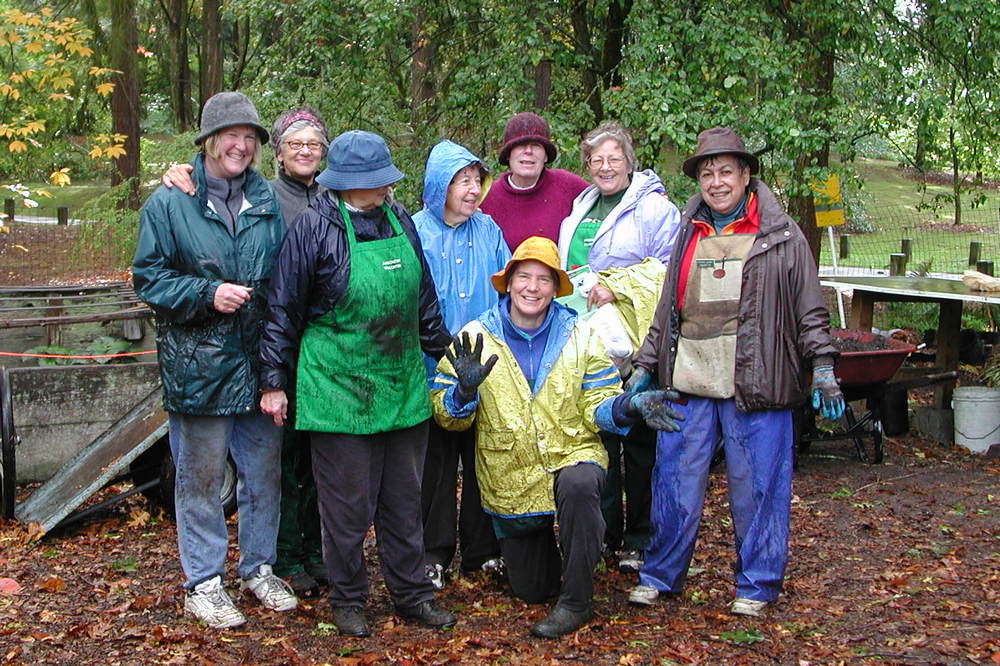 “The University garden crew were always immensely supportive—and continue to be today,” said Rita. “David Zuckerman and Roy Farrow especially have been very good to us.”

“The crew would always make sure the water line was working at the start of each season. They’d always offer to string hoses, if needed, and they’d bring the wood chips to mulch the ground around the nursery. We are beholden to them and all the good things they do!

Asked about their favorite donated plants that came into the nursery over the years, Barbara waxed poetic about the lovely native subshrub Linnea borealis, or twinflower.

“I only remember ever receiving it one time, from a lady who owned a cabin in the woods. It’s my absolute favorite plant. It’s very hard to transplant but I managed to get it to grow in my own garden.”

For Rita, it was a empress tree, Paulownia tomentosa.

“I call it the one that got away,” says Rita. “Someone dropped off a lovely young specimen in a pot, and there was great excitement among the volunteers. However, before we knew what happened, someone came into the nursery and swiped it.”

Looking to the Future

Asked for their thoughts on the future of the nursery—and where they hope to see it go in the coming years—Barbara and Rita Rae deferred to their successors.

“That’s for the folks who are taking over to decide,” said Barbara. “We’re leaving the nursery in very good hands. Susan and Jeannette have a better sense now of what’s needed to keep it going and flourishing. For instance, they are good with computers and comfortable with the adaptations that need to happen in the digital age—such as the new online retail set up.”

Niall Dunne is the communications manager and Bulletin editor at the Arboretum Foundation. 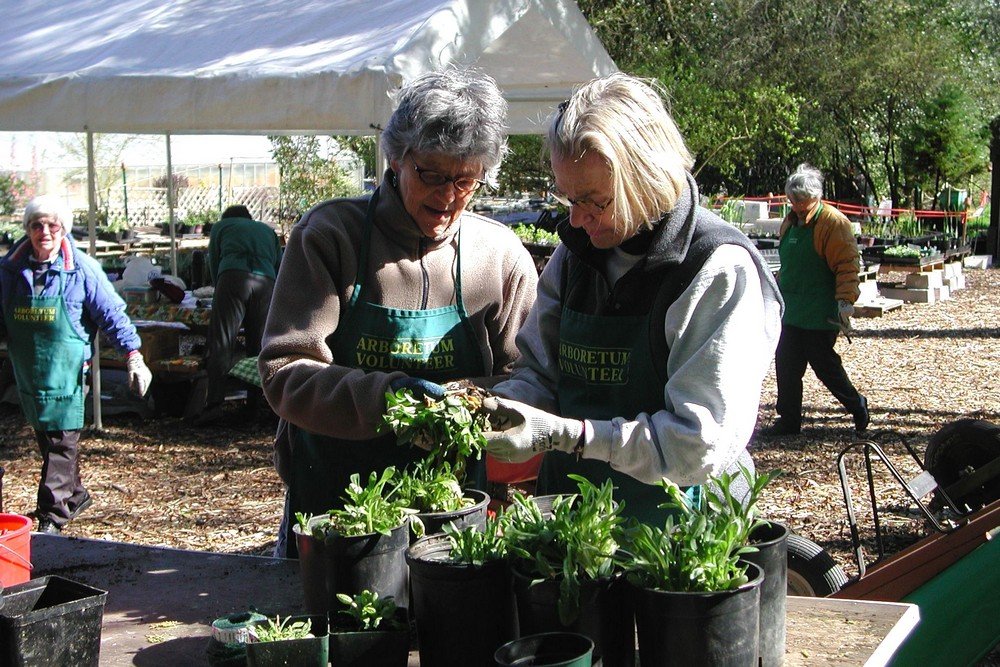 Volunteers prepping for the Early Bloomers sale in 2005. 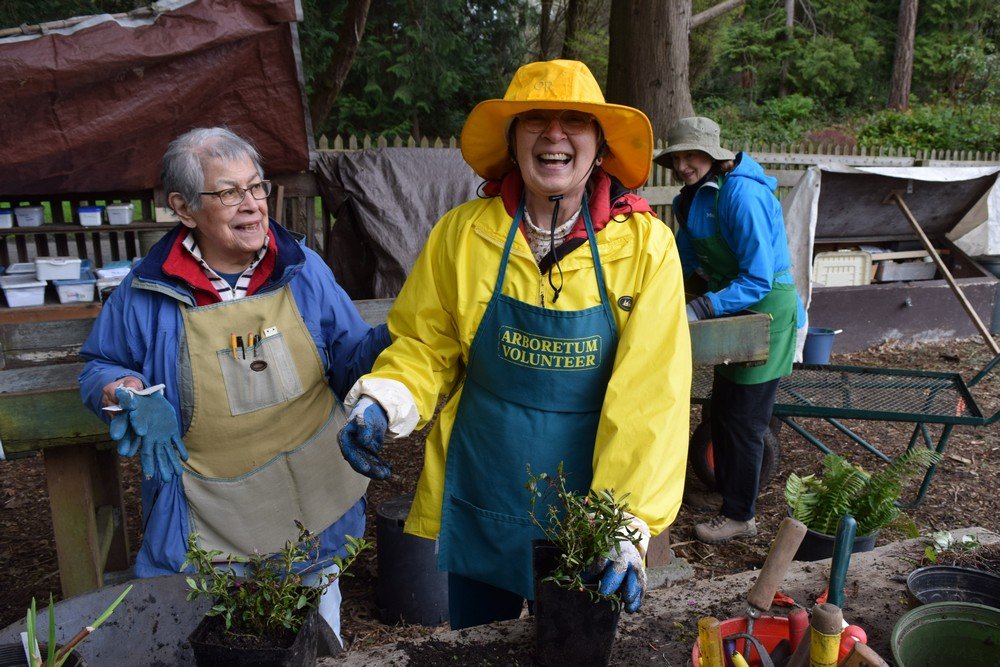 Prepping for the 2018 Early Bloomers sale. 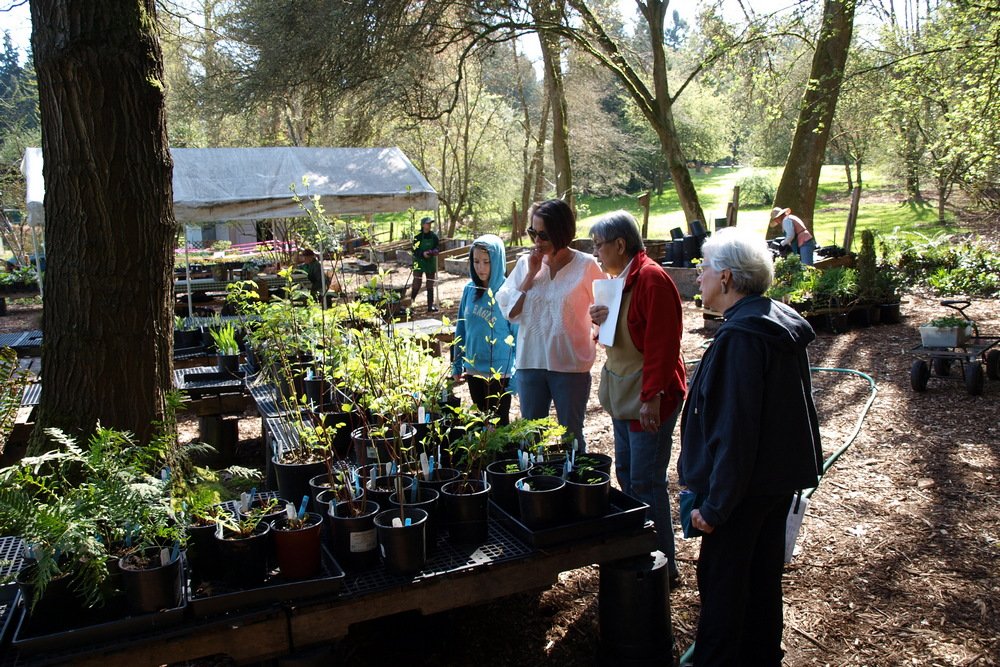 Rita advising some shoppers at the nursery. 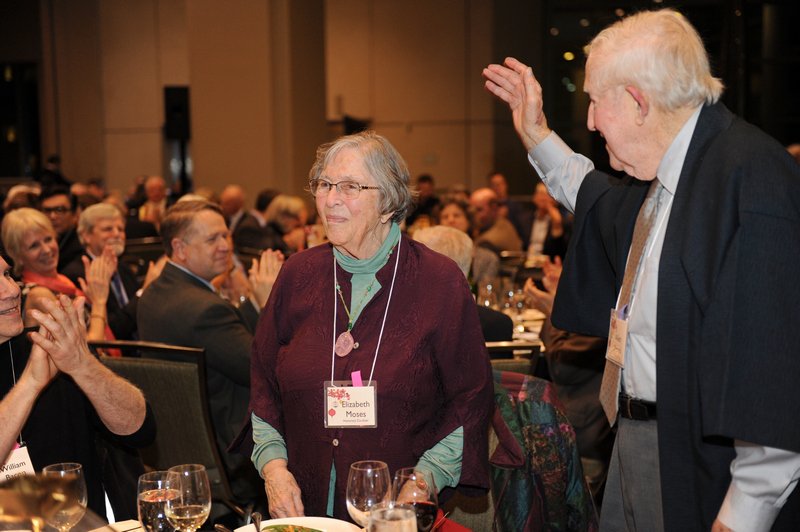 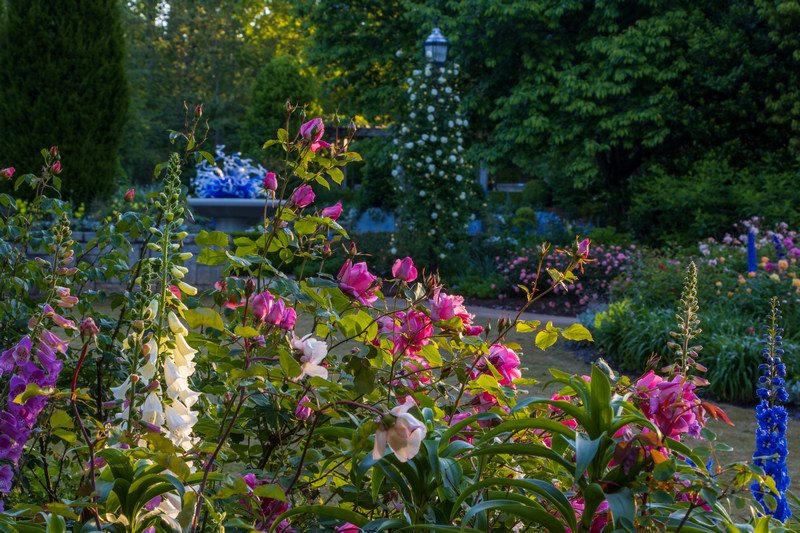 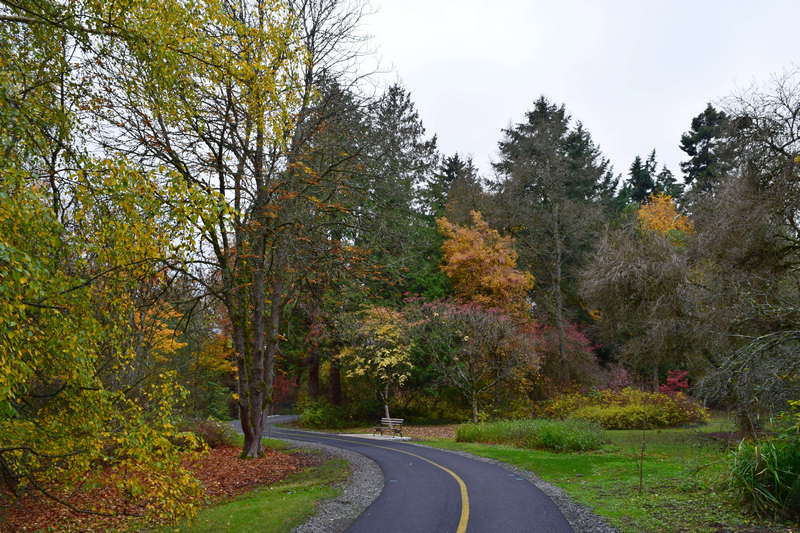