Home › Our Work › Revitalizing the Arboretum

As part of, and in addition to, the 2001 Master Plan, the Foundation helps fund the restoration and enhancement of historic plant collections in the Arboretum, as well as the addition of new gardens. We also support the restoration of natural areas and features, such as Arboretum Creek. Following are descriptions of some key recent projects.

In January 2021, Fred Hoyt retired as the Director of UW Botanic Gardens after a hugely influential 38-year career at the Washington Park Arboretum and Center for Urban Horticulture. In honor of Fred’s many accomplishments, the Arboretum Foundation established this fund to enable additions of wild-collected, rare or endangered plants to the Arboretum’s collections, with a special focus on Pacific Connections. Funds may cover future collecting expeditions, or partnerships with other gardens, nurseries or collectors.

The letter to Fred announcing the fund included this quote from UW Associate Professor Emeritus Iain Robertson, from a recent Historylink interview: “Fred has been one of the most important people in the Arboretum, probably more than anyone else has. He’s been constant over many, many years. And he’s been great at talking with people from different perspectives and making sure that every viewpoint is heard.” 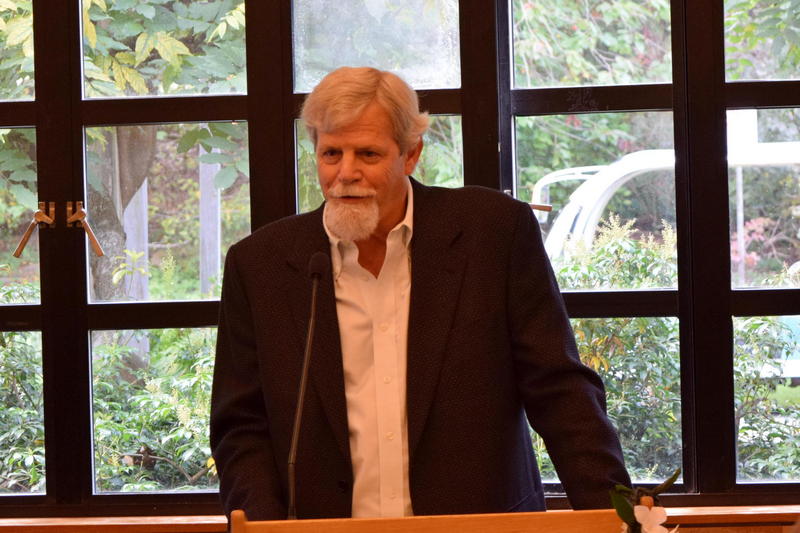 More than 60 donors contributed to the launch of the Fred Hoyt Fund during our Spring Forward! gala on March 4. If you’d like to support plant exploration at the Arboretum, make a gift on our donate form, using the Comments box to designate the gift to the “Fred Hoyt Fund.”

In spring 2019, the Arboretum embarked on a plan to restore one its most special and beloved places: Rhododendron Glen. The project was made possible by a generous gift of $750,000 from long-time Foundation volunteer Mary Ellen Mulder and her husband, Gordon Mulder.

Located near the south end of the Arboretum, Rhododendron Glen dates to the 1930s and has it all: dramatic topography, tall trees, a babbling brook, and beautiful understory plants, including many unusual species of rhododendron. Over time, however, important parts of the glen lost their luster. Weeds infiltrated; the canopy became too dense in places, resulting in a loss of understory plants; trails deteriorated and were negatively impacting the stream; and key sections of the stream and its associated rock work were overgrown or have silted up. 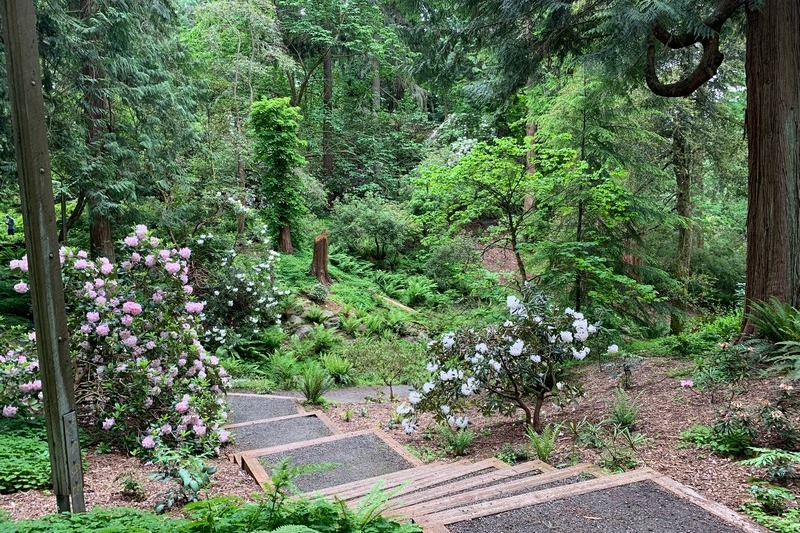 Weeding, strategic opening-up of the canopy, and lots of new plantings have already had a transformative effect on the glen. Progress has also been made on the stream and pond restoration components of the project. Wetland and watercourse reconnaissance has been conducted in the larger glen area, and Berger Partnership has been hired to develop the design.

In spring 2018, the Arboretum Foundation and its University and City partners launched a project to clean up and enhance the plant collections and natural areas along the Boulevard and Loop Trail corridors. The project was made possible by a generous gift of $275,000 we received from a longtime friend of the Arboretum. Work crews from the Student Conservation Association (SCA) helped launch the project by spending four weeks removing blackberry and other invasive plants along Arboretum Creek. 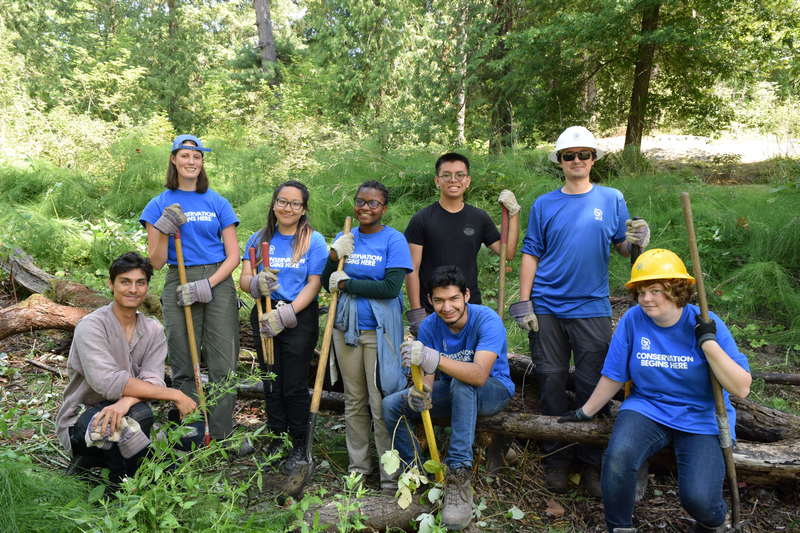 The funding has allowed us to hire temporary gardeners, purchase necessary equipment, and install many new plants along the creek and at various locations along the Boulevard and Loop Trail corridor. The Arboretum’s prized Viburnum Collection along the Loop Trail has undergone a major revitalization and enhancement. The SCA returned in the summer of 2019 for more weeding work in the Pinetum and Loop Trail wetlands. And our generous donor renewed their commitment to the project with gifts of $100,000 in both 2019 and 2020.

In September 2017, the Arboretum opened its newest ornamental display—the Azalea Way Centennial Garden—to the public. Located by the pond at the south end of Azalea Way, the summer-themed garden celebrates the 100th anniversary of the Seattle Garden Club, which has a long and influential history in the Arboretum. It was created using a grant from the Garden Club, along with matching funds from the Foundation. 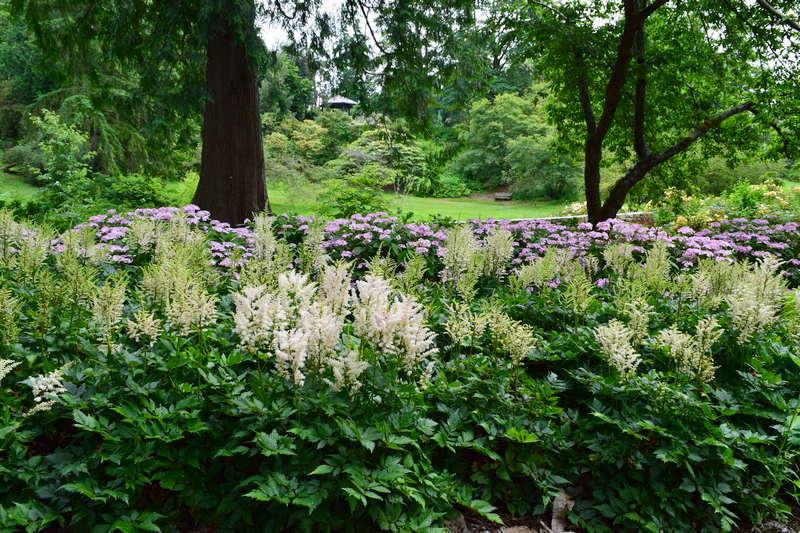 The centerpiece is a long, curving, stone bench offering views across the pond to the tree-clad hillside beyond. Hydrangeas are the summer-blooming stars of the show. Cultivars of Hydrangea macrophylla, H. serrata, and H. quercifolia lead the visitor through the garden. Calycanthus, Olearia, and Alangium round out the shrub layer, while plantings of rhododendrons and enkianthus connect the garden to the spring-flowering displays on Azalea Way. 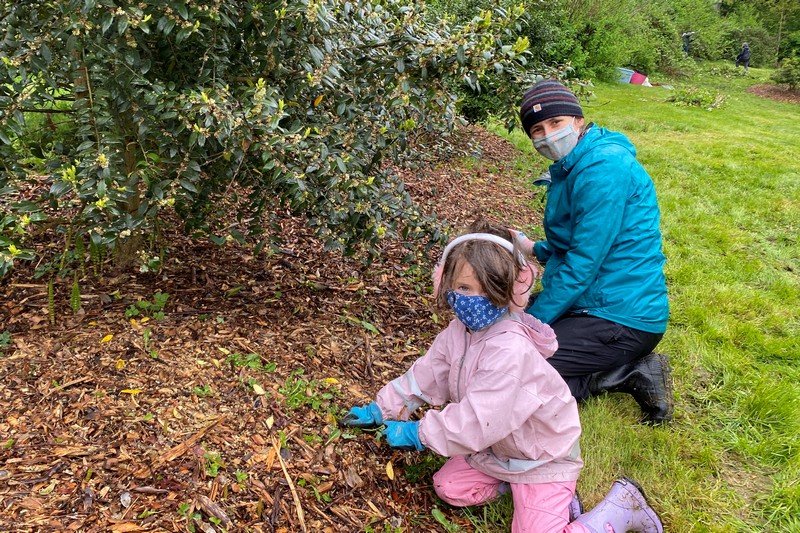 A total of 60 volunteers participated in our annual Earth Day at the Arboretum event on April 24. Co-hosted with UW Botanic Gardens and the Student Conservation Association, the work-service day was smaller than usual, due to Covid restrictions, but the volunteers...

Visitors Center & Arboretum Shop Now Open! Following a year of pandemic-related closure, the Graham Visitors Center and Arboretum Gift Shop have reopened in a limited capacity. Opening hours for the lobby are Wednesday through Sunday, 10 a.m. to 3 p.m. The shop...

How you can help

Make a gift to fund collection renovation in the Arboretum (you can designate a gift in the “comments” section of our donation form). To learn more, please email our Development Director, Lee Benner or call her at 206-325-4510