The newly restored Tsutakawa Memorial Gates at the north end of Azalea Way.

Our public celebration for the restoration of the Tsutakawa Memorial Gates on September 14 was a truly special occasion! A large crowd of visitors attended the late-afternoon event and enjoyed wonderful live musical performances, food trucks, and a joyous ribbon-cutting ceremony.

Foundation Executive Director Jane Stonecipher welcomed everyone to the ceremony and quickly recapped the story behind the iconic bronze sculptural gates: their original design by renowned artist George Tsutakawa; their fabrication by his son and assistant, Gerard, and installation at the entrance to the Arboretum in 1976; their theft and destruction at the beginning of the pandemic; and finally, in 2022, their rehabilitation by Gerard, now himself a celebrated sculptor. She compared the narrative to a suspenseful Netflix movie, with a rating of “R for resilience.”

Jane also speculated about why there has been such a high level of emotion and emphasis around this project: “I think it centers around what the gates represent: a tribute to all who visit the Arboretum—the sense of welcome that draws us in and says, ‘it matters that you are here’.”

Watch a short video of the ribbon cutting.

Jane thanked the Tsutakawa family, the Foundation’s City and University partners, and all the donors and stakeholders who came together to make the restoration project possible. She said that gates will be officially gifted to the City of Seattle to become part of its civic art collection.

Senior Deputy Mayor Monisha Harrell then spoke about the importance of public spaces and public art—and how crucial parks like the Arboretum have been during the past two-plus years of the pandemic. She also talked about her own personal connection to the Arboretum. Consul General of Japan, Hisao Inagaki, then spoke about gates and how they’ve helped build a cultural bridge between his country and the U.S. He thanked all the parties involved with the restoration.

“George Tsutakawa’s love for earth, nature, and humanity was infused in the creation of the gates,” said Mr. Inagaki. “Now, over 45 years later, that legacy and the spirit of the Tsutakawa family will continue, thanks to an outpouring of support from the community. This is truly a community project that would not have been possible without the collaborative efforts and cooperation of the people here, including the local Japanese and Japanese-American communities. The gates will symbolize hope and resilience—past, present, and future.” 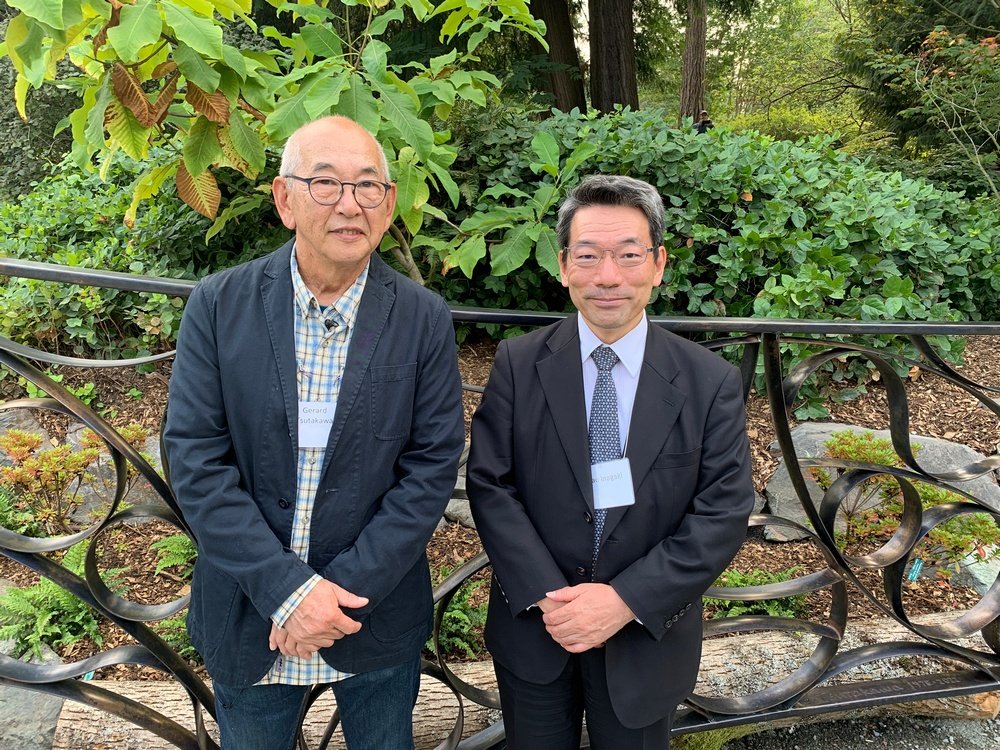 Gerard Tsutakawa then spoke about how the new location of the gates at the north entrance to Azalea Way is an improvement over the gates former location at the Visitors Center parking lot—particularly in terms of welcoming people to the Arboretum. (He also revealed that his wife, Judy, and he were married in 1972 at the south end of Azalea Way, 50 years ago!) He then described the challenges of remanufacturing the gates from scratch—fitting, welding, grinding 150 pieces of metal together and adding the finish—and how pleased he was with the results. “Enjoy the gates now, for hopefully longer,” he joked, “because I won’t be around the next time.”

Royal Alley-Barnes, interim director of the Seattle Office of Arts and Culture, which helped sponsor the restoration of the gates, then spoke about the City’s civic art collection, consisting of more than 400 individual works, including seven from the Tsutakawa family. She said George Tsutakawa’s work is “recognized as a merging of Japanese and broader Puget Sound aesthetic traditions, giving us a unified expression of effortless beauty, enduring beauty, personal and communal beauty.” And she said we are fortunate to have Gerard Tsutakawa here to ensure that the legacy of George’s work continues. 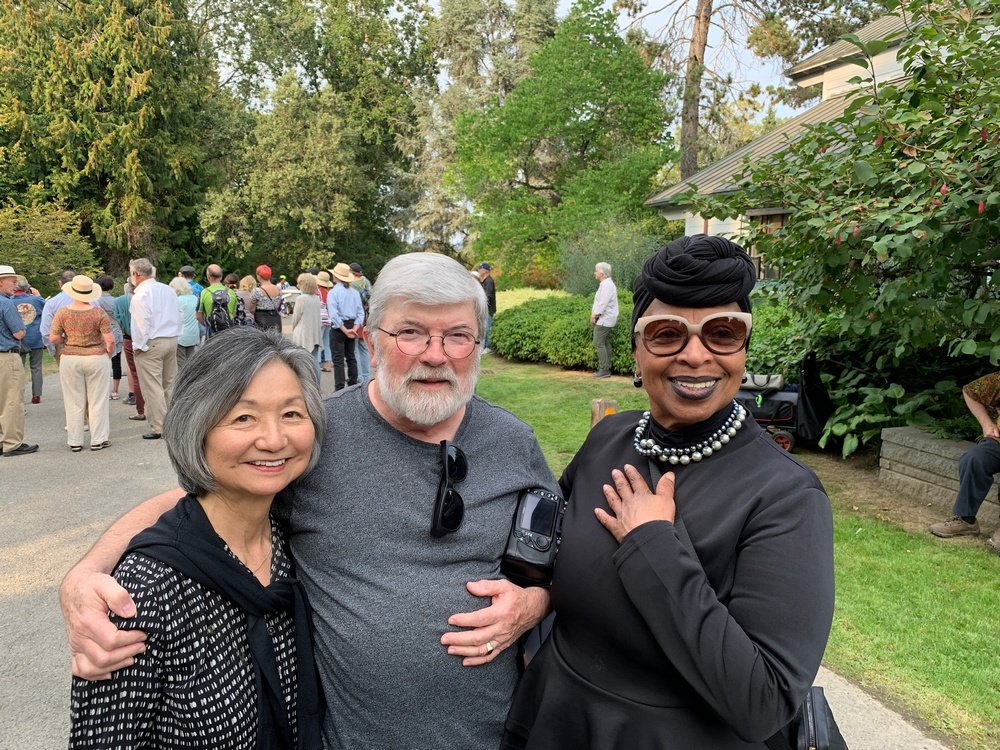 “His work here today is an example of true generational wealth and the arts that create our social cohesion. Gerard has allowed us to time-travel in real time and to embrace and engage with the ephemeral and the actual of so much beauty.”

With that, the speakers all gathered beside the Memorial Gates, cut the ceremonial ribbon, and pushed the gates open to welcome generations of new visitors to the Arboretum. The gates will remain in a permanently open position.

After the ceremony, visitors and guests were treated to fabulous taiko drumming by CHIKIRI and the School of Taiko, jazz by the Steve Griggs Ensemble, and koto by Marcia Takamura & Kanako Kashima. The food trucks 314 Pies and Buddha Bruddah provided delicious savories and sweets. 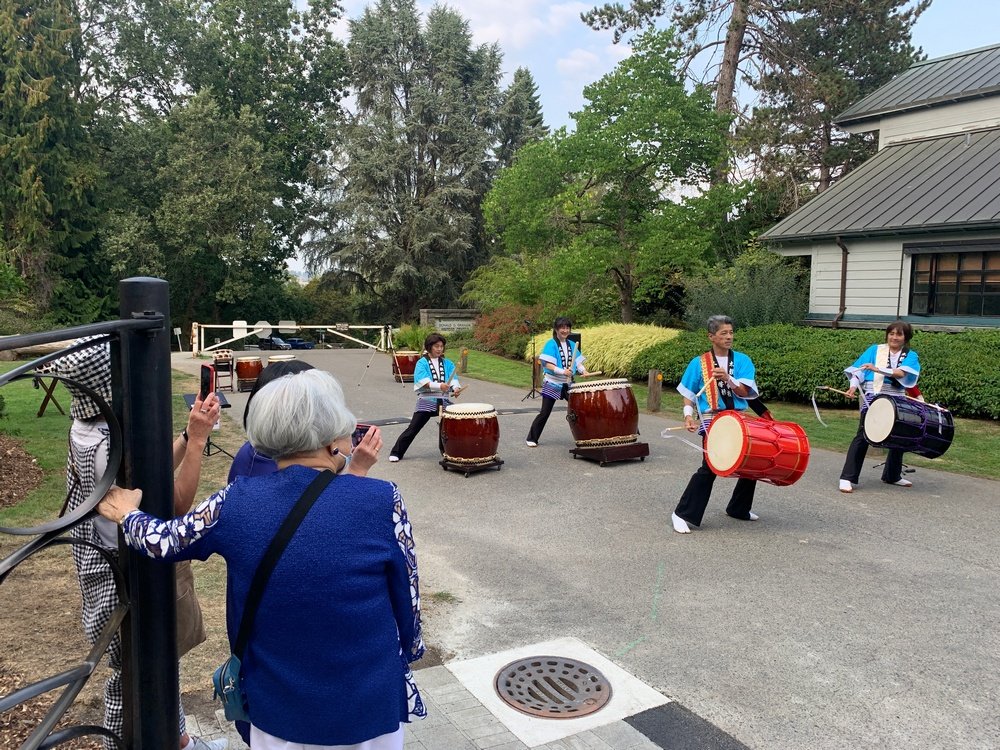 Visitors enjoying a performance by CHIKIRI and the School of TAIKO.

Acknowledging our donors: Prior to the public celebration, the Foundation hosted a small gathering for the project donors and partners. Speakers included Arboretum Foundation Board President Peter Rees, Director of the UW’s School of Environmental and Forest Sciences Dan Brown, and Acting Superintendent of Seattle Parks and Recreation Christopher Williams. At the conclusion, Foundation Board Member Tyler Moriguchi, plantsman Dan Hinkley, and Mayumi Tsutakawa (George’s daughter)—who all served on the committee for the campaign to raise funds for the replacement of the gates—led a sake toast.

As she raised her sake cup, Mayumi said, “I really want to tell you on behalf of the Tsutakawa family how much we appreciate all of the work that you did and all of the funding that you donated to make this a reality. It’s just an amazing thing. We thought it would be hard but it turns out that people were so in love with the original gates that a lot of support came forth. Kanpai!” 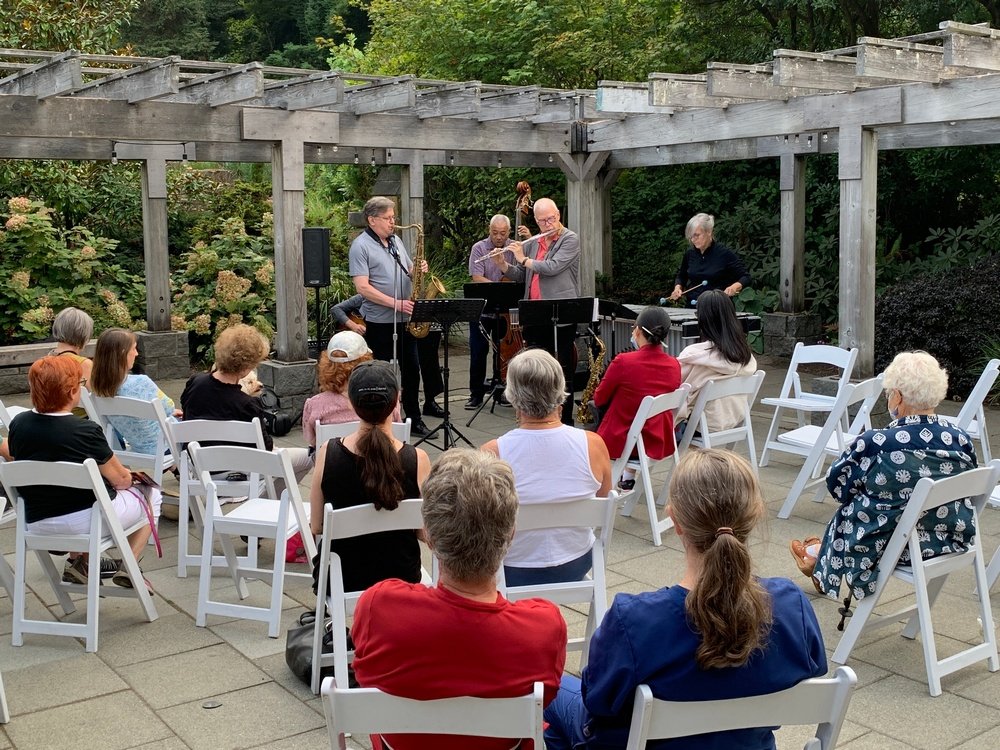 Visitors enjoying a jazz performance by the Steve Griggs Ensemble.

Our Public Celebration in the News!

Thanks to everyone who attended our event on September 14. KING 5 News and King 5 Evening were present to capture some of the magic. Crosscut came to the Arboretum on September 8 to report on the installation.

Jubilant scenes at the Arboretum yesterday during

THEN AND NOW: Sculptor @gerardtsutakawa standing a